Thanks to new Månegarm‘s album Ynglingaättens öde (out since 15th April), we had the opportunity to have a conversation with their lead singer & bass player Erik Grawsiö. 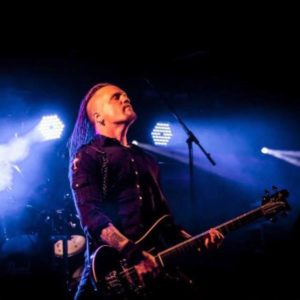 Hello Erik ! And thank you for according me this interview! First of all, how are you? Is it everything alright on your side?

Erik: Hi there! I’m great. We have just played three shows in Sweden and it feels amazing to be back on stage again.

So now let’s speak about your new album Ynglingaättens Öde that just came out. It seems that it is your 10th record. I’ve listened to it and it is freaking awesome! From the beginning to now, how do you see your evolution? Do you think that you have achieved your goals with this album? Are there any future improvements you’re looking for?

Erik: Thank you so much, great to hear that!

I see the evolution for Månegarm as a very much natural process. We have never aimed to evolve in a certain direction or have tried to sound in a different way. It has just happened when composing new songs. Album one [Nordstjärnans tidsålder] and two [Havets vargar] were more ”black metal” and with a rawer sound. We were young and strong back then so the music was way faster too haha! But it was 20-25 years ago and it’s hard to compare the albums we made back then to the albums we compose today…the recording process, the production, budget, inspiration etc.etc. It was a different time back then but we enjoyed every moment of it. When I think of the early days of Månegarm I get happy, great times indeed! 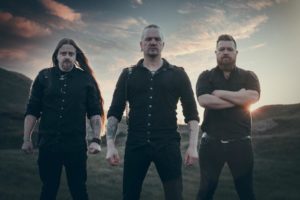 In my opinion we went from a black metal oriented sound to a more ”Viking metal” sound already back in 2003 when we released our 3rd album Dödsfärd. We kept that Nordic/Månegarm vibe but the Dödsfärd album was much more ”folkish”, the pace was slower, the songs were more catchy and the violin and clean vocals played a bigger part. From that day we have just tried to make it better and evolve within that ”Månegarm-frame” with the goal to deliver good music. We like our style, we like what we do and that’s it.

Our goal with this album was to release some really good music and I think we did. In that sence we have acchieved our goal with this album. The reviews for the album and videos have been great so we are really satisfied. I guess you are always trying to write that super hit and even if I have written some decent songs I guess I’m still locking to write that perfect one! Maybe I will never do it but striving to do so is what keeps me motivated to compose new songs.

You’ve recorded this album during Covid-19 pandemic. How did you feel at this moment? Did you have some issues during the process?

Erik: The world has opened up again so lets hope that it stays that way.

The pandemic was terrible in so many ways of course, but when it came to the composing and recording process, it actually gave us more time for that. I mean, there were no gigs, festivals, rehearsals so we could spend all that time on recording the album. So that was one good thing with the pandemic.

This album is about an old Swedish dynasty (Ynglings dynasty) that probably lived in 9th century. We know their story thanks to a poem (Ynglingatal) cited by Snorri Sturluson. How did you discover this poem? Which one of you came with the idea to make a concept album about it?

Erik : Yes, Snorres ”Ynglingasaga” is based on, and is like a poetic version of Ynglingatal.

It was Jakobs idea to make a concept album of this poem and the idea was born many years ago, before the last album Fornaldarsagor [released in 2019], when Jakob, during his university studies of old Norse religion, had the honor of having professor O. Sundqvist as a teacher, who had written a dissertation on the field. At that time it was just an idea, no lyrics were written. 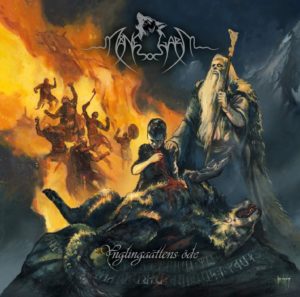 Later on, when I started to compose some new Månegarm songs, we felt that the music had the right variety and feeling to finally make this idea come to life.

I’ve read your explanations about your songs, and I must admit that this saga is very entertaining! Do you strongly believe that most of these scenes really happened? In your opinion, which one of these stories is the most fascinating?

Erik : If these kings have existed or not we will never know. Most likely many of the kings have never existed and are fictional/saga kings but there are also many people that believe that some kings have existed for real. Besides from Snorre Sturlassons Ynglinga saga, some kings are mentioned in other important sources like Historia Norwegiae (an old Norwegian composition/work, written in Latin around the year 1100), and the Beowulf poem from around 700, and to have other independent sources makes it more interesting and also more possible that some of the kings have really existed.

For “Hågkomst av ett liv” (which isn’t directly related to Ynglings dynasty), you’ve declared that the “only remnants of us all is preserved in the memories of future generations”. So do you think that your band has to keep alive all of these past stories? Is it a mission for you and for your country?

Erik : You’re right, ”Hågkomst av ett liv” is not based on any certain part of Ynglingatal. It’s more of a reflection to end this conceptual album and it’s about a frequent subject in the Old Norse religion. We don’t see it as we have some kind of mission but we want to tell ”real” stories and there are so many fascinating and interesting poems, sagas, myths that you can explore. We believe history is very « connecting” for many people, and to explore your own history makes it even more interesting, at least for us.

Sadly to say there is very litte preserved (poems etc.) of what once where and as time pass by, these stories and sagas will be forgotten more and more. We do our best to high-light historic material and this is our way of keeping the history alive!

Who wrote songs in the band? Were there any changes in the process for this record?

Erik : No changes. I compose and arrange the music and Jakob writes the lyrics.

As usual, you shot some videos in order to promote your album. For “Ulvhjärtat”, you were hired as well as a young actor (Anton Andè) but also a german shepherd called Fenris. He looks like a real wolf! Is it his real coat’s color? How did you discover Fenris?

Erik : Fenris is Jakobs girlfriend’s dog. He’s a real big bastard but really nice. He is pretty much alike a black wolf and it was cool to make a video with an animal, we have never done that before.

But if you talk to the video crew it was really difficult ! Most of the time Fenris had other ideas than to record a music video hahaha !

Anton is Markus’ [band’s guitarist] oldest son. Anton is 12 years old and it was really fun that he wanted to play in the video. He did a great job !

For “En snara av guld”, both of your daughters collaborated. (Tuva for video’s shooting & Lea for singing) It is amazing! How this situation happened? Did you have to hardly convince them? Was it a challenge for everyone?

Erik : Yes it was really amazing and I’m very proud of them both.

I had this idea, that female vocals would be cool, just like in our previous song ”Ett sista farväl” for example. At first I thought that Ellinor Widefors would sing this part but when I had composed and recorded a demo of this song I just couldn’t wait….I was so excited to try this idea so I asked my youngest daughter Lea (soon 15 years old) if she could help me out. She sings a bit and sings pretty good. She don’t have Ellinors big, warm voice of course but Lea’s young and more fragile voice made it just perfect. It really created that nice atmosphere and made the song much better and dynamic. And I have my own little studio at home so it was really easy to try out these ideas with Lea.

When we decided to make a video out of this song I asked my older daughter Tuva (17) if she wanted to join and she was excited about the idea ! And it was so cool that we could involve so many family members in both music and videos. We’re very happy with how it all turned out !

That is another subject, but do you have some news from Jonas Almquist [band’s guitarist from 1995 to 2016]? He left the band in because of health issues. Is he well now?

Erik : I think so but I can’t say for sure. I have no contact with him at all since he left the band.

Let’s talk about future live shows. Hopefully pandemic is almost behind us, so are you planning to do a European tour? May we see you soon in France?

Erik : As I said earlier, after doing these three live shows it feels amazing !  We’ll see about touring, no plans for now. We are not a ”hard touring band”. We all have families and kids so we can’t be away for that many days…and we’re getting older as well. I can’t bounce around in a bus for several weeks haha ! Ten days maximum.

I think we have a show in France in the middle/end of September if I’m not mistaken. Don’t remember the name though…

We’re now ending this interview. Do you have a last word before conclusion?

Erik : Take a listen to our new album if you get the chance ! We are really satifsfied with it and we hope that you all will like it as well.

AND…This summer, 26-27 of august, it’s time for our own festival again Månegarm Open Air in our home town Norrtälje ! We have a great line-up with Moonsorrow, Grand Magus, Einherjer and more. Come join us, it will be a blast ! 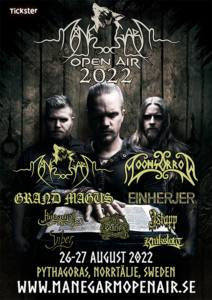