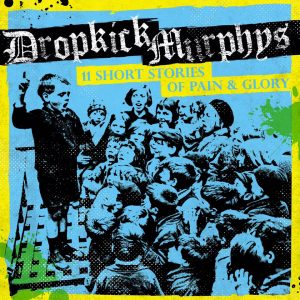 After “Signed and Sealed in Blood” released in 2013, the legendary Dropkick Murphys are back this year with another double-barreled name album: “11 Short Stories of Pain & Glory”. I’m warning you, this album is not intended for average punks who only ask bawlings in their ears and still louder and catchier songs because if there’s nothing to pogo, it sucks. No, I’m kidding, you’re gonna be served.

It doesn’t start straightway like the band used us to but rather in a quite dark way with an instrumental. “The Lonesome Boatman” is a cover of the Irish ballad by the Furey brothers with choirs, otherwise this wouldn’t be a Dropkick Murphys track. A marvelous intro for their upcoming shows!

The other novelty is that the piano and the harmonica sound very “nostalgic”. We especially hear it on “Sandlot” that talks about their childhoods. There’s also this “Old-school” pop/catchy touch in it as well as in “Kicked to the Curb”. It’s surprising but still enjoyable.

“Paying my way” is the main composition of the album to me. This song is powerful, it’s literally like a therapy. The band particularly campaigns against addiction and the implication of the massive pharmaceutical industries in it.

Between two mid-tempo tracks comes “I Had a Hat”, a song just as crazy as “Captain Kelly’s Kitchen” and it makes a marvelous mess!

Things slow down again with “4-15-13”. It’s striking from the beginning, unexpectedly moving. It’s a tribute to the attack during the Marathon of Boston in 2013. The introduction is purely folk, almost at the same level as any Irish traditional ballad. The lyrics touched me a lot because they don’t directly deal with the attack, they go beyond this. They rather invoke in a very simple the basis of what people aspire to, who they are. And it’s wonderful.

« You’ll never walk alone” is the song that should have closed the album to me and that’s another surprise given its origin. It comes from a musical from 1945 (“Carousel” by Rodgers and Hammerstein) and I still wonder how the hell they got the idea of making a cover of it. But fundamentally, the lyrics are in accordance with the state of mind of the band through this album: hope and optimism after a hard and painful period.

If there’s one thing I dislike about this album, it’s the mastering. During an interview, they said they had changed studio so that they could focus more on the whole process, which is a good reason to do so. But the power and the genuineness of their singing took a blow. The tone of the voice of Al Barr is missing on most of the album and the one of Ken Casey sounds almost common.

While any performance of any of these songs would give you chills, especially in acoustic version like they did during their promo.

Overall, we can feel that the band got older, which explains slower compositions. Can we be mad at this? I don’t think so. Because it’s just the way things go, they went through a lot of things and from now on, they gained certain wisdoms (who would have believed it?). The wisdom of continuing at their own pace and of remaining true to themselves.

Until the next time!