We had the chance to speak with Despot from Numenor, about the latest album, Sword and sorcery, and other fantasy connected subjects. 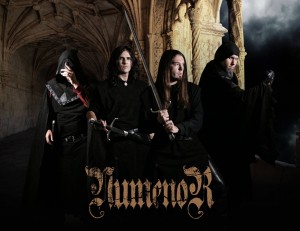 Hello Despot, your upcoming album, “sword and sorcery” has been released on the 15th September of this year, what could we expect from it?

More or less brand new material is answer to our debut record  »Colossal Darkness » but definitely it has some differences from our debut work. I could say that  »Sword and Sorcery » stands as dark power metal issue comparing with the first record which was more based on epic black metal moments. But, surly there’s also a obvious connection style-wise between our first two issues. We could even say that the newer material is even more bombastic and epic in a way.

I red the title and listened to the songs that you put online, it seems that fantasy literature is still your main inspiration, could you tell us more about your tastes in this genre and how it influence your way to compose ?

As a matter of fact our music and style will be always based on epic and fantasy literature. Just as it was the case with the debut lyrical background for the 2nd full-length reflects various tales and stories based on various dark fantasy literature. So, once more, one could expect some songs devoted to different sagas from Moorcocok’s or Tolkien’s opus.

Christopher lee died this year, as a fan of LOTR, I guess you’ve been touched by this event. Did you ever consider the possibility to work with him when he was alive, since he did some metal works with rhapsody of fire and had his own band… It could have been cool to gather Numenor and Saruman 😉

Of course that I will be delight if I could worked with Christopher Lee, but I was also quite realistic on the other hand. When you are listening to our songs you can notice Lee’s influences in my narration-like vocals. So, this kind of vocals are directly influenced by Lee’s deep narrations. As s a matter of fact he was such a brilliant actor and narrator as well!

Also, I am just preparing a tribute for Christopher Lee on our next epic fantasy convection. He was such a great inspiration not only as Saruman, but I also adore his earlier works as Dracula and a like.

I heard once that there will be a special album presenting some of your ancient works revisited with the new sound of Numenor, is this project on the way to become reality?

I’ve already positive answer to your question since there will be second edition and release of our new album. In a way, we will have two labels that will release  »Sword and Sorcery » since aside of Stormspell Records (USA) also Stygian Crypt Productions is interested to have re-release of the new album. So, I have already make a decision to put two older songs (originally recorded back in 2009) as a bonus tracks to re-release edition of  »Sword and Sorcery ». This re-release will have different cover artwork, too.

Is there any chance that we could see you someday on stage in France?

Yes, I am quite sure that there will be a good chance. I mean, after the second album we are definitely planning to have some tour dates in the future. We were waiting until the band became more popular, but I think that at the fall of this year we will make a decision where and when there will be debut live show of the band.

Some words for the Valkyries webzine readers?

I would like to thank you for all support, to webzine and to all its readers and followers! I also hope that you’ll like our new record  »Sword and Sorcery ». All the best until next time!

Interview by BALMUNG, for Valkyries Webzine