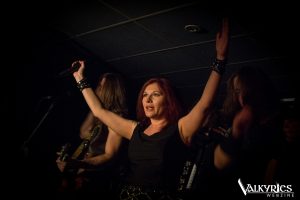 After their long-awaited first gigs in France, a short interview to take stock with Kalevala was a must.

Huge thanks to Alexey Mitrofanov for his time!

Good day friends! We have just returned home and everyone is trying to have some rest before the next part of the tour in November.

This was actually the second time in Europe for us, but it was the first appearance in France for our band, which turned out to be a really great and pleasant journey. To be honest, the whole idea to go on tour in October was arranged around the invitation to this beautiful country.

Yes, exactly, we made an acoustic show and it was the one of a kind on this tour.

We perform the unplugged gigs from time to time, but this one was a little bit special. It was held in a small place called Dugny-Sur-Meuse. They have a very old building there, that was used as a hospital and a church a long time ago. We were really surprised to see the kind of the audience that came to this concert. Of course there were metalheads (to whom we are really thankful for coming to our shows in any place!), but a lot of people of a much senior age came as well. Then I saw some kids. The audience and their reaction was really loud. Metalheads, kids, Grandmothers and Grandfathers were clapping and shouting really loud. It was a really warm welcome and it was definitely a unique show. We tried to perform a really special set list on this date. There were almost constant improvisations. And it was really really cold inside this stone building!

I saw that this performance was filmed like on 4 cameras and then the organizers of the show told me that they will send us the video. So, the Dugny-Sur-Meuse night will be available to see on the internet soon! 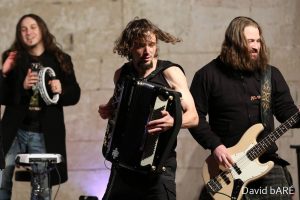 Hmm, yes. We performed a song, called “Yarilo” on the Red Square during one of the festivals that are usually attached to some kind of holidays. And we are the first metal band that has performed on the Red Square ever, you know. That is quite a good highlight I guess.

I am not really sure if the hosts of the gig were really realizing what kind of the band Kalevala is. So, we had spread the news, the metal fans came to support us, the others were shocked. I guess it was a 100% rock’n’roll situation!

Of course, we are attached to our country and its history like most of the folk bands do. It is a huge pool of inspiration. The music of the band is mostly written by our guitarist Nikita Andriyanov which is a great tandem with Ksenia’s (the vocalist) lyrics. You can feel the influence of absolutely different genres in the music of the band. From Jazz to Thrash and Groove metal.

Oh, I think it is very simple.
The visual side makes a huge amount of the atmosphere that is why a lot of time is spend on making the costumes. In the “Nagryanuli” video we were trying to make the costumes and make up in the way that would allow to morph the band members closer to the animals that were used in filming the clip. Each musician looks a little like his animal partner in the video. Try to watch the video taking this aspect in consideration.

We are getting ready for the next part of the tour. We are trying to make our tours more intense. We want to get acquainted with people from different part of the world to present our music to the metal and folk lovers. The tours outside of Russia are mostly in Europe now, but we are working on South America also, as we are receiving a lot of messages from our fans from there (Hola amigos!)

We are also working on a new album, which will be released this year (we hope so). So, the plans are simple in the plain view – new songs, new videos, new shows! We really hope to return to France with the new album!