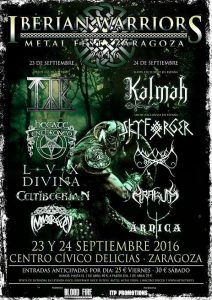 Zaragoza, capital city of Aragon in Spain. From the point of view of France, this is not the kind of place where we would go to for a Metal gig. But this city actually seems to be a reference in the genre.

After having walked a twentyish minutes under what was supposed to be a cloudy sky, I took shelter in the cool air of the venue. The festival takes place in the Civic Centre; this means that unlike the traditional concert halls that only open for these events, this is a social, cultural and multipurpose where generations mix with each other. So quite atypical things can happen like an old man sitting down at the table next to the one of a group of young metalheads. It apparently seemed common on the moment, yet this is not something we would see anywhere else.

Talking about it, I found the cafeteria well fitted out and cheap thanks to the difference of VAT. The festival’s staff also appeared easy to reach, patient and skilled. On this same occasion, I’d like to thank Alex from La Poza del Meh as she helped me a lot as well.

After I got my wristband and left my bag to the cloakroom, I went into the concert hall. It looked pretty nice, there were benches all around and a mead stall.

The lights went out, the first show started.

They’re a young Viking Death Metal band from Barcelona and the discovery of this festival for me.

They did a satisfying performance and despite a sparse crowd, the heart was there! There was a nice atmosphere and the audience played the game, which is not always done for the bands that have the hard job of opening a gig or a festival.

Obviously, when they arrive they make all the difference.

But hell, they are very chatty! They sure must be funny but when you understand half of what they say, it sometimes seems too long.

Anyways, people were dancing, jostling and it was really friendly.

While the party was in full swing, I caught a sight of an old man among the horde of metalheads. He was wearing his Basque beret, his work overalls pants and a checkered shirt just like any local elderly person. He was simply here to watch the show. All the sincerity and the genuineness of this act fascinated me.

I still wonder what this band has left to prove in concert. Probably not much but surely to get older and wiser regarding their work in studio and I’m resolutely waiting for their next album.

I left the room to eat to take my mind off things. I enjoyed the exhibition at the entrance of the Civic Centre as well as the merchandising stalls, where I bought myself the Keltorevolution album of Celtibeerian, the Iberian Tour t-shirt of Tyr and the official one of the festival. There was also a craftsman, TrollMartellet, who was selling horns among others. 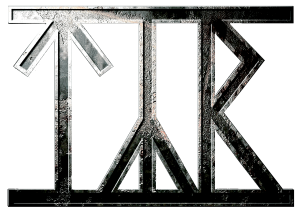 Finally, the ultimate band of the night. And they keep us waiting!

The setlist was perfect, especially with “Gandkvaedi Trondar” as introduction. Almost all my favorite songs were played: “The Lay of Thrym”, “Ramund hin Unge”, “Turdi Torkilsdottir” and more importantly “Regin Smidur” that I absolutely wanted to hear in concert.
I had a whale of a time, people were singing, chanting and…laughing.

Gunnar was exceptionally in an excellent shape, though he’s already the happiest man of the world on stage, and it was also nice to see Tadeusz Rieckmann (Dalriada) taking pleasure in playing and seeing such a good crowd.

Unfortunately, Heri had a technical problem that took time to be solved so Terji and his colleague played some melodies to make us wait patiently. And regarding ridiculous songs, they’re as bad as each other. With songs such as “The Pink Panther”.

In short, this is one of the best gigs I’ve been to so far.

To talk about what seemed to be missing, I haven’t seen any of the detractors who wanted to cancel Tyr’s coming. No protester.

This proves what I was thinking from the beginning: they are people who appear from nowhere to lecture others about respect while libeling, inciting to hatred and boycott when those same people wouldn’t even show up to events of this kind. So I really hope that the German venues that buckled under this virtual pressure will kick themselves for this.

And then, “monsters” are Metal.

For a second edition, I must admit I’m impressed. There was no problem with the organization except few delays, technical problems and the maid shortage. But it happens even to the best ones.

Unfortunately for me, I couldn’t stay in Zaragoza for the two days but I will sure come back next year or even before!