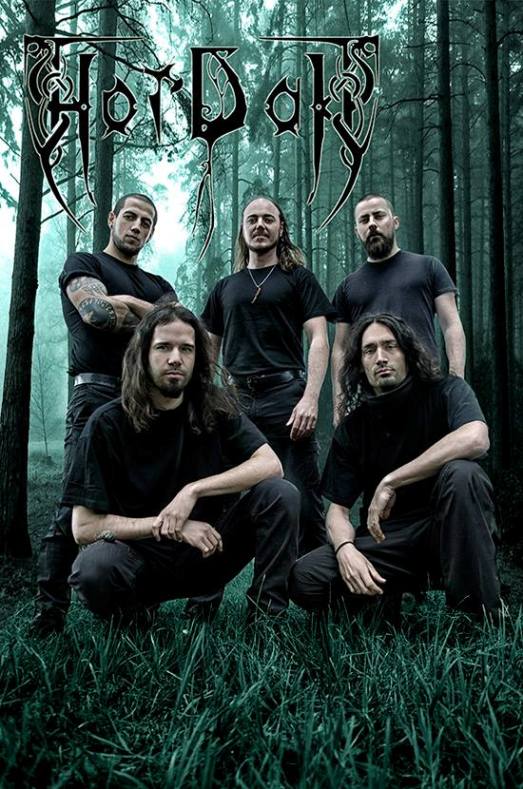 After the release of the fourth album by Hordak, one of their members accepted to answer some questions for us …

Hi there! We are Hordak from Spain and we play what we call Celtiberian Pagan Metal since 2002.  We started as a duo and currently we are five members united by a common interest in the music, the nature and many other things. We have recorded so far one demo and four albums, all of them self-funded, two of them self-released and two of them released and re-released by different labels. We play alive every now and then. We have been part of different compilations and different projects such as Falkenbach´s tribute with the song “When Gjallarhorn will sound” or the worldwide project folkearth for which we recorded two songs released on the album “Drakkars in the mist”.

We liked that name when we chose it and we still love it. The name for sure represents our band and reminds us of our childhood, it also is the basque for « hordes ».

– You describe your music as « Celtiberian pagan metal ». I couldn’t help thinking of the band Celtibeerian. I have the feeling that folk metal bands in your region really want to highlight their culture. What do you think of that ?

There are many bands in Spain that sing about our celtiberian heritage. There was a first wave of Celtiberian pagan metal bands in the late 80´s and the beginning of the 90´s such as Nazgul, Berserk, Cyhiriaeth, Wolfencross or Crystalmoors to mention a few. Currently new bands are coming up which is good, for it enriches the scene.

– How do you proceed to compose your songs ?

Every song is different. Sometimes one of us brings a riff or some ideas and we can work on them. It can also happen that one of us has a complete song and we just need to work together on the arrangements. Concerning the lyrics, they are always written in the end, once the music is done, so you can have a better idea about what the music tells you or how does it inspire you.

– Which topics do you talk about in your songs ? Do you only draw your inspiration from the local culture or are there other civilisations you’re interested in ?

There are different topics we talk about. We sure like to talk about the Celtiberian heritage, but also about the nature, the cycle of life or philosophy. Our last album, “Padre” the Spanish for “father”, is dedicated to the sun, father of life on earth. Every song on this album is related to the sun one way or another.

– I immediately thought about Wolfchant when I listened to your songs. Is it a model for you ? What are the other bands that inspire you ?

I have never listened to Wolfchant´s music so, I´m afraid they are not a model for us. We are five musicians in the band and each one of us has our own different influences, likes, inspiration, etc. Immortal, Summoning and Forefather are our main influences related to the music style we play, but we also listen to different music styles and bands such as Boards of Canada, Robert Johnson, Bill Evans, Lou Reed, Helloween, Turbonegro or Haemorrhage, just to mention a few.

– You brought your collaboration with Griffin Music to a close and you have started a new one with Casus Belli Musica. Can you explain that choice to us ?

Griffin Music just disappeared. We self-released our previous album “Under the sign of the wilderness” because we couldn´t find a proper offer to release it and even though we are glad with the result we wanted the album to be released by a label. We search some time and eventually we signed with Casus Belli Musica. We are very glad with their interest, support and professionality.

– We can see on all your artworks a horseman. Is it a kind of mascot, of symbol for the band, a bit like the warrior who is on all Ensiferum’s artworks ? Does it represent anything particular for you ?

It is the talented Belgian painter Kris Verwimp who draws our covers. He has been doing covers and paintings for metal bands for a long time, he is a legend. Concerning the horseman, it has not been deliberate, it is just coincidence.

– Let’s talk about your last album Padre. There are some collaborations on this album, Lavin Uruksoth from Crystal Moors, Wulfstan from Forefather for instance. How did it happen ?

Yes, it is a tradition for us and we love to do it. We think that it means a great improvement for the songs and the whole album.

Wulfstan from the mighty anglo-sanxon metal band Forefather sings on the track “Bloodline of the wolves”. We are very proud and thankful that he they accepted to collaborate with us in this album, because we love their music and they have been a reference for us. They were very humble and easy to work with.

Jose Luis Frías used to play with us as bagpiper in the past. He is a good friend of the band and a well-known musician in Spanish scene. He has recorded some flutes on the track “Soaring”.

Lavin Uruksoth from the Cantabrian pagan metal band Crystalmoors (among others), wrote the lyrics and recorded vocals on the trak “Father Sun – Father Dragon”. He is extremely talented and has improved the song from good to EPIC.

Laura Camón Botella is a violin player from the OFE, spanish philharmonic orchestra. She plays with us as much as she can and it is a honor to count with such a great musician on our side.
– We can hear at the beginning of « A leader in times of war » an extract from the movie Spartacus by Stanley Kubrick. Why did you choose this passage and what does it bring to the song ?

The speech of Spartacus speaks for itself, a call to freedom and to stay true to yourself. It could have been said at any time in human history and still would remain contemporary. There have been many of them all along history, but we thought that Spartacus was a good example of “A leader in times of war” and the film by Stanley Kubrick is a masterpiece, so we thought it could work very good and one thing led to another.

– What are your projects for the months to come ? Do you have some gigs which are already planned ?

We would love to present “Padre” alive, but we haven´t receive any interesting offer yet.

– Thanks a lot for having answered my questions, the last word is for you !

Thanks for your interest and support. Anyone who is interested in searching some more info about the band can visit our website www.paganhordak.net – All the best!!