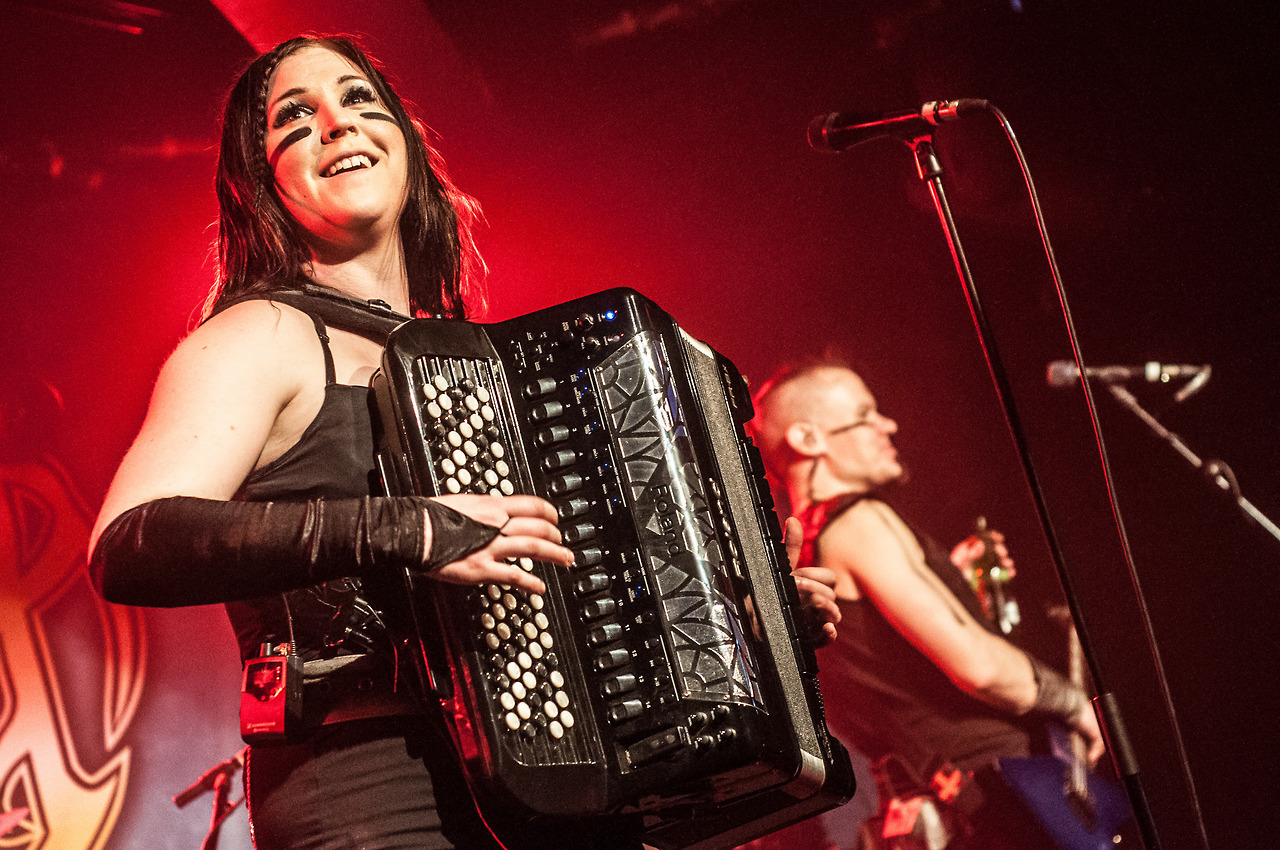 Just before Ensiferum’s show in Paris, we had the opportunity to meet their accordion player Netta Skog and to ask her some questions about the new album and other things about the band !

I think pretty good ! Of course there’s always negative parts, people who don’t like the new album, but mostly the reviews and the comments from the fans are really good.

Yes ! And in Germany it was the first time we were in top 10, so we were really happy about it !

Well, in my opinion, the greatest difference is my accordion, since there never was any real accordion on the previous albums. And I think there’s a lot of clean vocals on this album, and especially my own vocals too, so I think it’s a big step for this album.

With the new album, we realised every single song is playable, we could absolutely play the whole album.

Yes ! And when we play the songs we think « oh how can we choose ?! », we’d love to play all of them ! But now, of course, we decided to play « Way of the Warrior », and the first single « For Those About to Fight for Metal », and the third single « King of Storms ». And there are also two special songs which are the title song « Two Paths », and … one of the biggest difference is that now, I will play « Feast with Valkyries », I think we gonna play it live too.

Well, I didn’t write that song but what I heard is that Sami, the bass player, was jamming by himself and then he read the news, the singer of AC/DC lost his hearing, and he was like « Noooo !!! Well, AC/DC, AC/DC … Haaa, AC/DC ! », and he got his inspiration from that ! And then he read another news about Manowar, I can’t remember what it said, anyway, he got the inspiration from the news to make that tribute song.

I don’t know about the name of the album, but what I heard and what I think, the album is like a « two paths », you can choose to go one side or other side. You know, for example there is like aggressive songs and then there are soft, and even pop songs, that’s like softer. So there are two paths on the album, so yes, exactly !

I think we didn’t have a theme when we began to write this album, it’s just what it is now, so … well !

So Emmi left the band for family reasons, that’s understandable, and they chose me because they knew me before, because I played in Turisas, so we were friends already and at first they wanted me to stay just for one tour, and Emmi decided to leave so it was easier to the guys that they just keep me in the band so that’s how it happened !

Well, we do ! We have a lot of fun on stage ! Of course I don’t know what kind of atmosphere there was when Emmi was in the band, but I love the guys and playing with them !

Maybe ! You never know, every album is a mystery in the future so it depends on the songs, what kind of songs we will have, but I wrote the song « Feast with Valkyries » with Markus so it was easier that I sang it too, it was my baby !

Yes, we have Russia in December, and we have South America in November, and of course after Christmas we go to Asia in Japan and China, and later we will have another European tour and US tour !

We’re talking about that ! It would be so much fun, we would love that but of course, this thing is the main thing, and if we have time we will do more acoustic shows.

Well of course the playing was different because we sat down but the atmosphere was almost the same, there were mosh pits, in an acoustic show it is quite amazing, so nothing bad to say about that, it was really good !

Experience of course, and I was 16 when I played with Turisas so every girl would be shy if she played with such a band on stage. And there’s also the fact that I love the guys, we have a lot of fun together on stage and out of the stage, so it’s great to play with them !

Thanks to you, see you later !