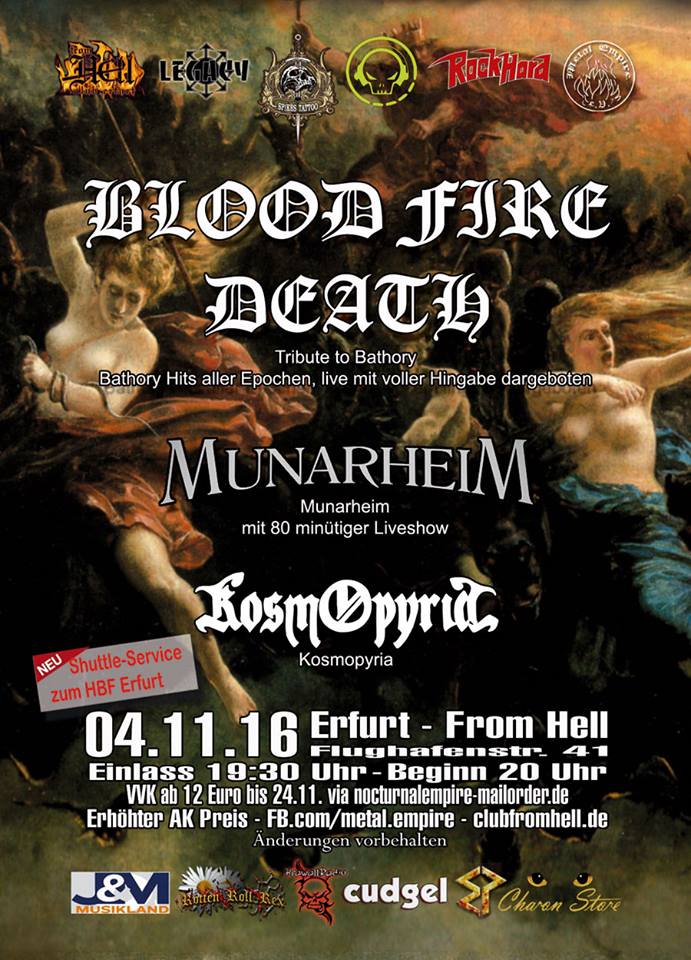 I had the opportunity to meet Munarheim’s singer and bassist just before their show in Erfurt and to ask them some questions !

– First of all, can you introduce the band ?

Julius : We are eight members, Pascal is the lead singer, I am the bass player, Wolfgang plays the drums, Theresa acoustic guitar, Sebastian acoustic guitar and E-guitar, Helge and Christoph electric guitars, Ramona, she plays the flute but she’s pregnant at the moment so we have a session flutist. Sebastian is the song-writer, the composer of all the songs, and Pascal writes 99% of the lyrics.

– What is the link between Munarheim and Kosmopyria, can we consider it as the genesis, the starting point of Munarheim ? Because I know there are common members in both bands …

It was Pascal who played bass guitar in the former band Obscura Religio, and also in this band played Helge and Wolfgang. And then, Pascal decided after a little break to play with Sebastian for Munarheim again, and so he needed some musicians, and so he asked Wolfgang, the drummer of Kosmopyria, and Helge, the guitar player to play with him. And then, some parts were missing, so we were some old friends from work, we worked together at the hospital, and they asked me to play the bass, because Pascal only wanted to sing, and then Sebastian said that he had some influences for the flute and acoustic guitar, and Theresa is actually Wolfgang’s wife, his former girlfriend, now they are married, and Ramona who plays the flute is Theresa’s sister. There were some members changes between Obscura Religio and Kosmopyria, so they renamed to Kosmopyria. So we are old friends, we have one room we share together to practice.

– And is it not too difficult to reconcile both bands ?

I think it was maybe, because Pascal is no longer the bass player in Kosmopyria, he is only in Munarheim, so today we only have Helge and Wolfgang, they have to do in both shows today. But Wolfgang is an animal, a warrior, he likes that, he likes the drumming, he plays in three bands. And Helge only plays guitar in Munarheim, but he is the master mind of Kosmopyria.

– What are the themes and sources of inspiration for your lyrics ?

Our influences are poetry, romanticism, it’s a red line, all the lyrics refer to Romantic poetry. Sometimes it’s more directly, Pascal sometimes tries to paint with his words, to build a picture maybe, and so everyone can have his own interpretation …

– And what are your musical influences ?

A German band called Empyrium, Dornenreich, and for Sebastian it’s classical music because he studied it. And atmospheric black metal … and Alcest. And we discovered too Harakiri for the Sky. And there are also some German bands like Nocte Obducta.

– The first time I listened to your music, it first made me think of Equilibrium, for the symphonic and epic dimension !

– There is a contrast of colours in the artworks of both albums, the first one is bluish, as if the music was more atmospheric, and the second one is red, as if it was more aggressive, did you retranscribe that musically ?

It’s more a feeling. We didn’t choose it directly, we already had the songs, we thought they are a little softer on the first album, and dreaming is what we wanted to represent. And after that, like every artist you want to do something new, and Sebastian wrote the songs, he wrote the lyrics, and his feelings were more direct, more aggressive, he wanted to talk about the mankind. And the second thing is we were on the way to do something similar, the album’s initial name should have been « Under the stars », but for the feelings it didn’t work, from the process of writing and producing, we thought « no, it’s not about stars and blue », no, it’s not working. We wanted something very easy, the black cover with a head …

– By the way, what does this head represent, it looks like a goat’s skull !

Actually it’s a cow, because we wanted something aggressive. There were a lot of covers with skulls on it, and Sebastian found this picture, and the owner of the picture, he got in touch with him to ask him if we could use it. And he liked it, it was like the mood the album tries to transfer, and so he decided to take this picture. I think we can be a little bit honest, more metal, more evil !

– Death vocals are more important in the second album, why ?

Yeah, the vocals changed because we wanted to do something new, as always, and also so that Pascal wouldn’t ruin his voice, he worked with a coach, and then he learnt how to protect his voice, and to use higher and lower-pitched voices, so we decided to use it because now he was able to do it. And for the choirs, we had some ideas of Latin music because it was easier to use what we want to say. In German it’s sometimes difficult saying something right, that people don’t interpret it in the wrong way.

– Concerning the re-recordings, for instance « Ruhelos » and « Urkraft », why did you choose to re-record these tracks in particular ?

« Liberté » and « Urkraft » were two new songs for the album, but at this point Pascal didn’t know that there would be an album. He tried to just produce the EP, and « Ruhelos » was the re-recording of …Und der Wind sang. We chose « Ruhelos » because after the break, we did …Und der Wind sang, and Pascal’s idea was actually to do this song « Ruhelos » because he wanted to do it again with a new drummer in a better studio, to record guitars with a better sound, and Sebastian at this time finished his studies so he was able to write more powerful orchestral elements. And the second thing is that after « Ruhelos », they decided to do more, and Sebastian was at this time in a band called Eftwyrd, and they had some songs for Eftwyrd, and they wanted to transfer to the Munarheim’s style. And so we decided to record « Liberté » and « Urkraft ». In « Ruhelos » the lyrics are very important because they have a very powerful meaning for Pascal, they are very difficult to translate because they mean a lot to him, and this song is the starting point of Munarheim, without this song, we wouldn’t be standing here for the interview, this band wouldn’t even exist !

– Concerning your cover versions of « The Last Unicorn » and « Wolf », why did you choose to cover these songs ? Why aren’t they in last position in the albums, such as bonus tracks ? And are there other songs you would like to cover ?

For « Wolf » it’s very easy because Sebastian is fan of folk music and he found this band First Aid Kid and he thought the melodies of the song interesting, so he wrote orchestral parts to these melodies and thought « oh it’s great, now it sounds metal, and we could shout the lyrics and not just sing them, and we could do something new with Theresa singing and Pascal shouting ! ». And putting these songs at the end of the album wouldn’t have brought something special, we think they are a part of Munarheim, we didn’t want to release them as bonus tracks, they belong to the whole concept.

« The Last Unicorn » is a song extracted from a film, and our generation watched it when we were kids, and the theme, the lyrics of the film and its context fit in the whole concept of Munarheim. And the song’s structure fitted for metal and for the concept, and it’s the song of my childhood, so let’s try ! And maybe there will be cover songs again ! But at the moment there are so many songs we would like to cover. Maybe we could have a cover band, a side-project of Munarheim ! It is an idea we’ve already had, to make a cover album !

– There is a lot of acoustic passages in your albums, have you ever thought of recording an acoustic album ?

– And what about a real orchestra in live or in studio ?

Yes of course, it’s a big dream but it costs a lot ! But maybe if a big orchestra says to us « we want to play with you without being paid », why not !

– What are your studio and live plans ? You’ll be at the Ragnarok Festival next year !

We’re at the process of writing for the next album, but I can’t really say how many songs are ready, and we’ll play at the Ragnarök Festival next year.

– And nothing in France for the moment ?

No, but sometimes it’s a very fast process, we get a lot of answers from promoters, they say « play here, play here, play here ! », but I think we’ll be less present in 2017 than in 2016, and the second problem is that we have different jobs, it is always difficult for us to gather.

– What’s your ideal album, your goal to reach ?

We wanted to introduce some post-black metal elements, but it never worked ! We tried to have influences like blackgaze and shoegaze. But we don’t want another Stolzes Wesen Mensch or another Nacht und Sturme werden Licht, we want something new.

– About the fact of singing in German, what’s your opinion about bands which abandon their mothertongue ? I especially think of Equilibrium with their last album, I think it’s too bad, because I think that German has a particular strength in metal compared with other languages !

Pascal : it comes from my heart !

– Okay, thanks a lot for your answers !

You’re welcome ! It was the coldest interview we ever made !