March 7th. We are in Dijon for Gallia Comata and a night of folk metal. We took this opportunity to have a little talk with Arkadius from Suidakra (guitars and vocals). 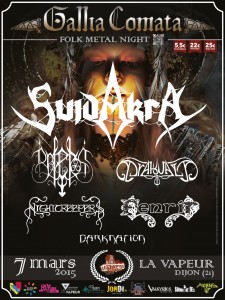 [sigh] Because last year, there was an opportunity, I mean we were supposed to play here [Gallia Comata was originally planned to happen in November 2014] in November, but we had to cancel the show because we had problems with the schedule and stuff like that so we had to move it. And fortunately we are back here.

No, because we have been busy with the writing of new material for the upcoming album, so we won’t play in other shows this year, just a few, a few festivals. We need some time for songwriting.

Yeah. The thing is that we are spread all over Germany you know, and to write new songs we have to meet in the middle, this time is a very important thing. 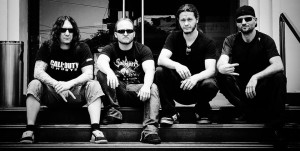 I can tell you only the title so far, which is Realms of Odori. It’s the same title as the project I have with Kris Verwimp, and it’s based on the same… it’s a fantasy story, it’s not Celtic or Scottish-based I think, like we did before. The only thing I can tell you so far is that we have almost finished 4 songs or something like that, and there are some new elements like on every Suidakra album. We are still waiting for the lyrics from Kris. We’ll play with Tina again, and Alex on the pipes… and maybe a few new surprises again…

The plan right now is to go into the studio in December or by the end of this year, so I guess the release will be for next year.

Realms of Odoric was an idea by Kris Verwimp. I did some instrumental stuff, and the thing with Realms of Odoric is that this is a very old story from Kris. He used to write a comic book and stuff like that back in the 90s, and then he asked me if I would be interested to do some songs to come by with his artwork because he just wanted to redo it, not just to make it like a new. Because his art of painting changed : if you compare it to his works in the 90s,, he developped himself as an artist. So I said yes, and started it. The story takes place in a fantasy world with a lot of creatures, and stuff like that. I mean, all these creatures are based on historical things like the Romans Celts, but at the end it’s all fantasy.

Yes, it’s very detailled. I wouldn’t compare it to The Lord of the Rings, but you can say the basic concept is a bit alike : a whole world, lot of stories, lot of tribes…

To be honest, I don’t really have a real statement about this because I’m not interested in that kind of talking or all those categories, like trends. The thing is that…. what I just saw is that a lot of things are going back : the folk scene is not as famous as it was a couple of years ago. That’s my feeling, but you know we always did our own thing, back in the 90s, in 1997 we had this folk influence… We never considered us as a folk metal band. We have always been a melodic death metal band with folk influence or elements. So, of course we were part of this scene, with which we became famous, but we didn’t see us as pagans or stuff like that so… 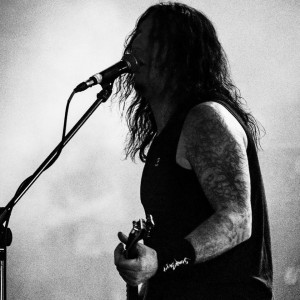 There are tons of them, but do you speak of folk metal or in general ?

There are not new bands, I mean, I like some stuff from Ensiferum, we’ve been on tour with them, there are a few songs, and bigger ones like Eluveitie, there are one or two songs that are cool… But I’m also listening to different kind of things, so I’m not a pagan…

Good question ! [laughs] I don’t know, maybe because of the fact we didn’t fit into that cliché because we had no armours, and those paintings… Of course we have those elements, we have Celtic sides, but we are not with kilts and stuff like that yet.

Yes sure, but what I realized a couple of last years is that the music scene is getting more difficult, and it’s also more difficult for bands to be booked because the market is like : the selling of Cds are getting low, so bands try to get money by playing shows. There are so many bands that are trying to play tours and stuff like that… It’s getting harder of course, but we have lots of talkings with festivals, organizers, bookers… Maybe some Paganfest tour even but nothing is confirmed yet.

Yes. For some reason… I mean, we were also surprised because when you’re just living in Europe, you usually don’t get any feedbacks or you cannot say as a band how much your fanbase is in countries like that. When we went there to play a show for the 1st time, we didn’t know what to expect, we never even knew there was a metal scene in countries like that… In the end, we went there, we had no expectations, and there were so many people singing also our songs, our lyrics, even on Ixth Legion, I was like « what the fuck ? ». I was really surprised, and yes they just invited SuidAkrA because they wanted to see us. When we first went to India, there was a really big university, and pupils at the university, they could make a choice about which band they wanted to invite, one international band, and they chose SuidAkrA. It was really a great experience, there were thousands of people ! It’s a totally different world.

It wasn’t really our decision : usually when we get booked, they just ask you if you are able to play a show on this date : everything fit so we said yes. There is no bigger reason behind it. Nothing special.

The feeling… It’s really hard for me to answer because I’m not involved in the whole scene, but what I saw on the Heidenfest for example, in 2010 we played with Orphaned Land a few show in France, so I just realized that in the North also there are a lot of folk metal fans in Normandy for instance, or the Celts, they are kind of connected to this folk/pagan : of course Celts were settled also in France, so yes I feel there is a special interest.

[follows a discussion about the Orphaned Land/SuidAkrA tour]

Ohhh you poor bastards. [laughs] I hope you enjoy the TV show… I say the same to all kind of fans : we are happy for what we are able to do, and we all say thanks to the fans for their support , no matter what way, if you buys Cds, come to the shows. Hope to see you on next things we are planning and kick your asses !